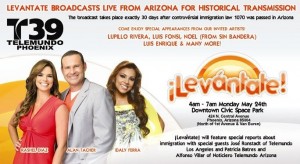 “Levántate,” Telemundo’s 3-hour morning show will air live from Arizona tomorrow. Its 3 hosts – Alan Tacher, Rashel Diaz and Idaly Ferrá – will be doing the broadcast from the Civic Space Center in Phoenix, from 7 am to 10 am EST. Telemundo is promoting the presence of several artists on the show, including Luis Enrique, Luis Fonis and Lupillo Rivera.

“Al Rojo Vivo” and Noticiero Telemundo will also be airing live segments from Arizona, as part of its immigration coverage.