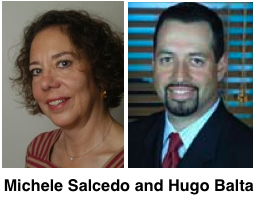 Michele Salcedo was elected president of the National Association of Hispanic Journalists. The announcement was made Saturday evening during the organization’s convention closing gala in Denver. She beat her opponent, Hugo Balta, by a mere 13 votes. During her acceptance speech Michele thanked Hugo for running a good campaign and promised to reach out to him during her presidency.

There were 4 other contested seats on the board. Members chose Manny de la Rosa as the new VP of Broadcast over Mekahlo Medina on a 53 to 47% vote. Rebecca Aguilar, who ran for General At-Large Officer got 74% of the vote, while J. Israel Balderas got 25%. For Online At-Large Officer, Patricio Espinoza won with 55% vs. 44% of the vote for Hiram Enriquez. Student representative Jacqueline Guzmán beat 2 opponents with 53% of the vote. The other student candidates were José Antonio Acevedo Cuevas and Alejandra Matos.

Only 34% of the eligible membership voted in these elections.