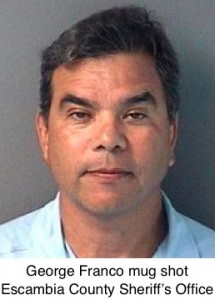 George Franco, a reporter at Fox-5 in Atlanta since 2005, was arrested and charged with battery for allegedly shoving and grabbing a BP contractor hired to clean up Pensacola beach.

The incident happened on Monday morning. According to the Atlanta Journal Constitution, George was in the general area of a clean-up site and was asked to leave by a BP site manager. He allegedly grabbed the contractor’s arm, spun him around and walked past him. A sheriff’s spokeswoman said “witnesses supported the claim of the victim.”

George was booked into the Escambia County jail. He was released on a $500 bond. The station is standing by their man, denying the charges. George is staying in Florida covering the oil spill. He’s due in court on June 28.