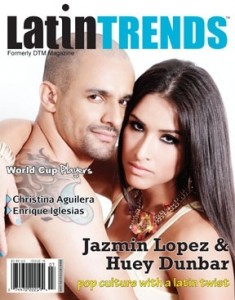 The July/August issue of Latin Trends is out on newsstands. The monthly magazine with a focus on “pop culture with a Latin twist,” was previously known as DTM – Defining Trends Magazine. Its publisher, Juan Guillén, decided to relaunch the mag with the new name as he charts out national expansion plans.

What started out as Dominican Times, a quarterly lifestyle magazine for Dominican-Americans in NY in September of 2001, first transitioned to DTM in 2005 and 5 years later, to Latin Trends, as a way to be more inclusive of the diverse interests of U.S. born and raised Latinos.

As Juan tells me, the magazine’s intent is to “connect with the bicultural and bilingual Latino community.” In addition to the print publication, Latin Trends will have a strong online presence.

“I believe print will be around for a long time and grow in the Hispanic market if properly aligned with a good internet strategy,” affirms Juan, explaining why he decided to hold on to a print product. He says the circulation currently stands at 84,000. That figure would eventually grow as he works to get to the “next level” – going national. He hopes he can get to that phase of his business plan within the next year and a half. In the meantime, he says he will be beefing up his editorial, marketing and business staff as he expands operations and internet presence.