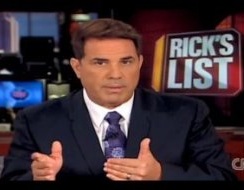 Now that Campbell Brown has signed off from her 8pm ET show, Rick Sanchez is taking over. Well, that’s until CNN’s new show with Kathleen Parker and Eliot Spitzer – yes, the former governor of NY who had to resign over a prostitution scandal – debuts in the fall. Until then, Rick will be pulling double duty.