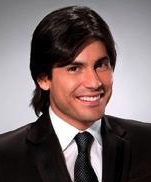 Poncho de Anda, a former Telemundo and most recently Mega TV talent, is in the news… in Puerto Rico. An article published in yesterday’s Primera Hora newspaper insinuates that Univision is looking to “freshen up” its talent and that Mexican-born Poncho has been hired to join “Despierta América.”

Reporter Rosalina Marrero-Rodriguez writes that Puerto Rican Rafael José, one of the original cast members of the show, who had left and recently returned to “Despierta América” as a guest host, was told he will soon be leaving so Poncho can join the morning team.

The reporter insinuates Ana María Canseco, who’s been on the show since it first went on the air in 1997, could be on the way out as well.

A Univision spokesperson would not comment on the story. However, a wikipedia entry on Poncho lists him as currently being a “television personality for the largest Hispanic Network in the United States, Univision.”