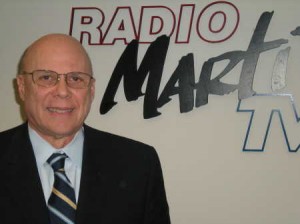 After 7 years as director of Radio/TV Martí, Pedro Roig last Friday resigned to his position as the head of the controversial U.S. government-funded stations.

In his resignation letter, partially printed in the Miami Herald, he lists a series of achievements under his leadership and touts the effectiveness of the stations “of bringing the news and information denied by the communist regime to the Cuban people.”

That effectiveness has been widely contested throughout the years, and most recently in a Senate Foreign Relations report in April of this year, prompting members of the Senate to call for the elimination of the Radio and TV Martí programs.

It’s estimated that over the years, the U.S. government has spent $500 million broadcasting news and entertainment to Cuba through the Radio/TV Martí stations, which have been plagued by complaints of biased politics, nepotism and cronyism. Both stations initially were based out of Washington, D.C. and moved to Miami in the mid-1990’s. In an article published in Poder magazine earlier this month, one of its employees, Niurka Fernández-Arteaga, a union rep for the American Federation of Government Employees, says the problem of cronyism might abate if the news organization moves back to D.C., because most of the employees working at the stations would rather give up their jobs than leave Miami.

No word yet on Pedro Roig’s replacement.