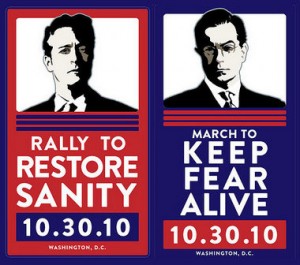 The NYT reports only 400 credentials were given out. The event has even attracted international attention, with TV crews from Japan, Switzerland and Russia requesting and getting the coveted press passes.

According to a Comedy Central rep, both Univision and Telemundo have requested and been granted credentials.

Some broadcast news organizations applied for as many as 40 passes to cover the event. 40? Do they want to cover it, or just attend the event?

Comedy Central is actually providing live feeds for U.S. and international outlets. They’ve even developed an iPhone app to for those who can’t physically be in D.C. to follow the event.