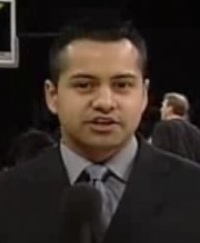 David Iñiga has been hired as anchor at KGET-17, the NBC affiliate in Bakersfield. He starts Nov. 22.