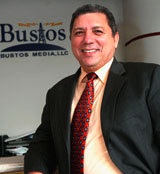 Amador Bustos, the CEO and founder of Bustos Media, is launching Exitos 93.5 FM in Portland, slowly expanding his radio assets and attempting to create his third radio network.

“I am very excited about the potential for my group of stations in the Portland market because it is a high growth Hispanic community and a more stable economic base,” Amador tells me. “Starting over is always hard but it is also a pleasure to continue doing something I love.”

Last year, Amador was forced to transfer his company’s radio and television licenses to NAP Broadcast Holding after he defaulted on loans he had taken to buy more stations right before the recession. He avoided foreclosure, but Amador and his brother John, who was VP of Operations, both had to resign from the company. NAP took over operations of the Bustos TV stations and 28 radio stations in California, Colorado, Washington, Idaho, Utah, and Wisconsin. Those radio and TV outlets now form part of Adelante Media Group.

Amador was able to keep a handful of stations in Oregon, California, and Texas. Within the next month, he’ll have 2 Portland FMs. Exitos 93.5 will be targeting 12-34 year-old listeners. He currently owns Spanish Christian KPWX 1130 AM and KZZR 94.3 FM. He also has 4 AM stations under contract with Adelante Media in Portland.

Bustos Media Holdings, LLC has also just bought an Austin station – KTXW 1120 AM. The company already owns Vietnamese-language station KZSJ 1120 AM in San Jose, CA as well as “Radio Saigon” KREH 900 AM in Houston and KTVX 890 AM in the Dallas market.

Amador is focusing on growing the Northwestern markets and has relocated his family from Sacramento to Portland to oversee the group of stations he owns there.

“My growth expectations are more modest since I have to work with my own capital. I see little prospect of media financing availability in the near future,” he says.

In 1992, prior to launching Bustos Media in 2004, he founded Z-Spanish Radio Network, which Amador sold to Entravision Communications in 2000 for $475 million.