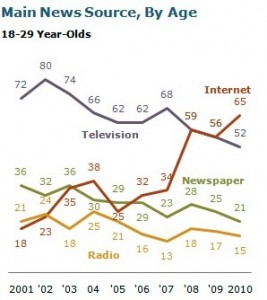 The findings were a result of a national survey by the Pew Research Center for the People & the Press in early December. 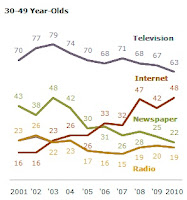 Older folks aren’t far behind. Right now, 48% of people 30 to 49 say the internet is their main news source.

Pew researchers predict that within the next few years, the internet will equal, or even surpass TV as the main source of national and international news for people in that age group.

The study also showed there’s more bad news for newspapers. Readership continues to drop – from 34% in 2007 to 31% now. Radio has remained steady, with 16% saying it’s their main source.