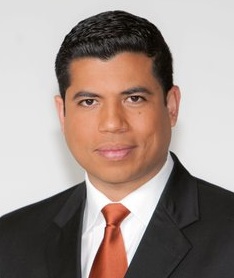 Juan Carlos Gutierrez is the new 5:00 p.m. and 10:00 p.m weekday anchor for Univision affiliates KCEC-TV in Denver and KVSN-TV in Colorado Springs/Pueblo.

Entravision Communications Corporation made the formal announcement yesterday, although his addition to their news team was effective January 17.

Juan Carlos joins Entravision from Latino Media Group and the Independent News Network in Davenport, Iowa, where was Managing Editor for the company’s Spanish-language shows. He began his TV career in 2002 at Telemundo as a producer, reporter, and backup sports anchor in Denver, New York City and Chicago. In 2006, he joined INN as host and producer of “Noticiero 24 San Diego” and “Border,” a news show broadcast simultaneously in the U.S. and Mexico. A year later, Juan Carlos joined UVM Azteca America Television Group, where he initially served as lead anchor for the local Atlanta news, and later anchored and produced local shows in Texas and Las Vegas.