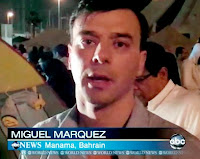 ABC News correspondent Miguel Marquez was beaten in Bahrain on Thursday, as he was covering the protests and unrest in that country.

He was actually on the phone with the network, describing how riot police had started firing tear gas and rubber bullets at protesters in a main square, when a group of thugs attacked him and beat him with billy clubs.
“No! No! No!” Miguel is heard yelling on the phone. He identified himself as a journalist, but that didn’t save him from the attack. You can hear him saying “I’m hit.”
Miguel is one of many U.S. journalists that have been hurt or harassed while covering anti-government protests in the Middle East in the past few weeks. Most recently, CBS correspondent Lara Logan was beaten and sexually assaulted in Cairo. ABC’s Christiane Amanpour was threatened and CNN’s Anderson Cooper was roughed up while covering the protests in Egypt.
This is Miguel’s report. You can hear when he’s actually attacked: