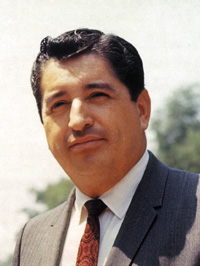 Forty years after his death while covering the Chicano Moratorium against the Vietnam war in East L.A., a report released on Tuesday concludes journalist Rubén Salazar was not a victim of a murder plot, but rather a victim of “tactical blunders” of the L.A. Sheriff’s department.

Rubén Salazar, an L.A. Times columnist and News Director at KMEX-34, was killed when he was struck in the head by a tear-gas projectile. At the time, he was inside a bar taking a break from covering the riot, when a sheriff’s deputy fired tear-gas into the bar.

The report was prepared by Michael Gennaco, head of the Office of Independent Review, who stated in a press conference on Tuesday that if deputies had wanted to kill Salazar, “they could have chosen a strategy that had a better chance of succeeding rather than taking a bling shot in the dark.” 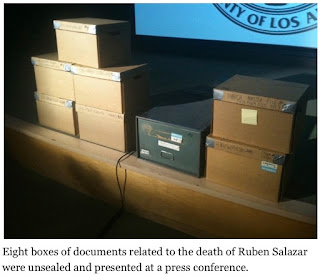 However, in Robert J. Lopez’s most recent story on the Salazar death and investigation, William Restrepo, a former KMEX reporter who was with him when he died, doesn’t believe the findings. He says Salazar was targeted because he had become “a leading voice for the growing Mexican-American community caught up in the turbulence of the anti-Vietnam War and civil rights movements.”

The L.A. Times had previously requested and been denied access to the Sheriff’s files on the investigation of Salazar’s death. Sheriff Lee Baca finally unsealed those records.

You can view some of the files and watch a photo/audio slide show prepared by Robert J. Lopez, by clicking here.