Telemundo has moved its morning show back to Miami, changed its talent, and revamped its format to include more entertainment in the hopes of attracting more viewers.

The newly conditioned show will start airing on Monday, Feb. 28 in HD. 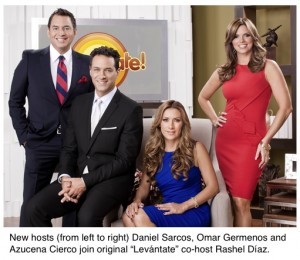 Since its inception in August of 2008, “Levántate” has been produced and transmitted out of Telemundo’s Puerto Rico station, WKAQ.

NBCU announced the move back in November, saying it was a “strategic investment by Telemundo to continue to grow the show and its viewership,” and to “take advantage of all the synergies” from the other network shows produced in its Miami headquarters.

“Levántate” switches from a 3 to a 4 anchor format. The network has dropped Alan Tacher and Idaly Ferrá from the show. Rashel Díaz remains from the original team. She’s joined by Daniel Sarcos, Omar Germenos and Azucena Cierco. 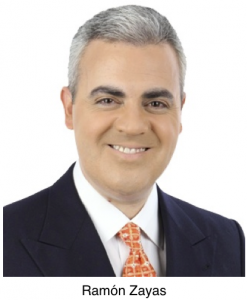 The show will also incorporate Ramón Zayas as an in-studio news anchor and producer.

According to Executive Producer Tony Mojena, the show’s focus will be “to provide a balance of information and entertainment to enlighten viewers and help them start the morning on a positive note.”

Tony says the show’s mission is to “help and unite Latinos from coast to coast, especially in common causes.” He points out the show went live from Arizona in October 2010, speaking out against SB1070. “We were also in Haiti and Chile after the earthquake. Our mission is clear. It’s to connect our people, to help them ‘get up,’ like the name of our show expresses.”

He says they’ll continue to take the show around the country as the need arises.

Omar Germenos was most recently an actor in Telemundo’s novela “¿Dónde está Elisa?” He began his career as an actor in his native Mexico. In the U.S., he hosted Univision’s “El Gran BlaBlazo” from 2000-2001.

For the past 3 years, Azucena Cierco has been working for “Al Rojo Vivo con María Celeste.” She previously worked as entertainment reporter for Univision. She began her TV career in Televisa Guadalajara.

Daniel Sarcos, was previously host of Venezuela’s “Super Sábado Sensacional” for 12 years. In 2008, Ecuavisa hired him to host “Trato Hecho,” the Spanish version of “Deal or No Deal” in Ecuador.

Ramón Zayas returns to Telemundo network. He was a correspondent and producer for “Ocurrió Así” in the early 1990’s. He was most recently weekend anchor for Telemundo 47 in New York, a job he’s held since 2003. He has previously held reporter positions in San Francisco’s Univision and Telemundo stations.

Rashel Díaz joined “Levántate” when it debuted in 2008. She began her career at Telemundo as host of “Decisiones de Mujeres.”

“Levántate” was the replacement for “Cada Día,” hosted by María Antonieta Collins, canceled after less than 3 years due to terrible ratings.