The just released report on the State of the News Media 2011 shows that people are spending more time with news than ever before. But it’s the web that has reeled in the biggest and fastest audience growth, surpassing newspapers for the first time. 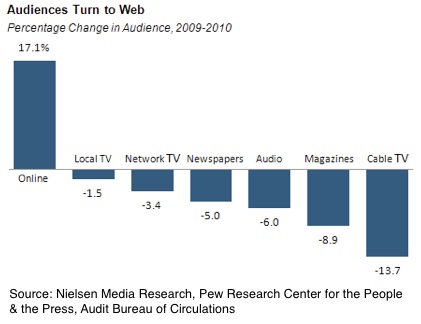 41% of Americans cited the internet as their source of national and international news.
46% say they get news online at least 3 times a week, while 40% get it from newspapers.
50% still tune in to local TV news.
47% say they get local news on mobile devices such as cellphones or other wireless devices (such as iPads).
Cable news suffered an almost 14% drop in viewership.
When it comes to ad revenues, newspapers experienced another 6.4% drop last year, while online advertising grew almost 14% to $25.8 billion in 2010. Last year was the first time more money was spent on online than print newspaper advertising.
You can read the detailed findings of the report here.