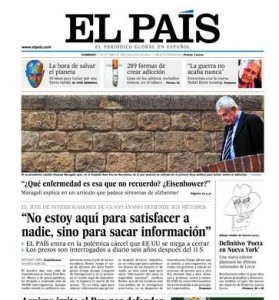 El País, the flagship newspaper of Spain’s Grupo PRISA, is expanding to the U.S.

The Spanish media giant announced a partnership with El Nuevo Herald to insert a special edition of El País within the Miami-based paper.

The Florida edition of El País will be printed and distributed by the Miami Herald Media Company. The paper’s content will be selected by its editorial staff in Spain. It will be available in newstands Mon-Fri, at a cost of .50 cents. The first joint edition started on March 7.

The deal helps El País expand its coverage in the Americas, where it currently has partnerships with newspapers in Argentina, Brazil, Chile, Mexico and the Dominican Republic.

Grupo PRISA currently has other assets in the U.S. It owns several radio stations and a stake in V-me television network.