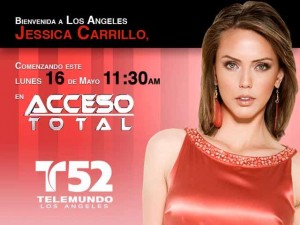 Jessica Carrillo joins KVEA-52 in Los Angeles as co-host of the local Telemundo entertainment show “Acceso Total.” Her first day on the air is today.

Jessica was previously co-host of “Acceso Total” in Dallas. Before that, she was a weather anchor for “Conteo de Noticias,” the regionalized newscast that aired in several Telemundo local stations.