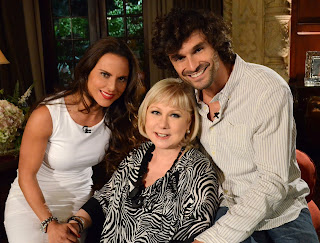 Cristina was famous for doing “after the novela is over specials” with the stars of a recently ended soap for years on Univision. It looks like she’s taking her trademark show over to Telemundo.

Kate del Castillo, Iván Sanchez (shown in the picture with Cristina), Humberto Zurita and several other key castmates sit down with the talk show host to talk about their roles on the hit novela.