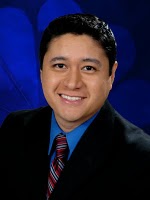 Luis Cruz has accepted a job offer as a reporter at KGTV, the ABC affiliate in San Diego. He starts the new gig in June.

For the past 3 years, Luis has been a News Director, Production & Promotions Manager at KYMA in Yuma, Arizona. His last day at the station is May 26. This is his second stint as news director at KYMA. He also filled that role from 2004 to 2006. He was an anchor/reporter at KVBC in Las Vegas in between those management jobs. Luis previously worked as a reporter at KFSN-TV in Fresno.

“This decision was difficult for me, because I work with a talented group of young award-winning journalists,” Luis tells me. “As of our last ratings period (Nielsen February 2011), all of our newscasts were #1.”

With this accomplishment, Luis says he “figured this was the right time to make this move. I’ll be working for Joel Davis, who was also my News Director when I was a reporter at KFSN-TV in Fresno.”

Luis says he looks forward to getting back to field reporting and living in San Diego.