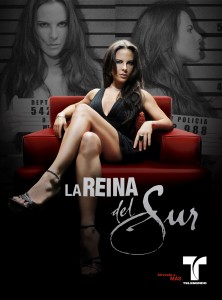 The grand finale of Telemundo’s record-breaking novela, “Reina del Sur” is Monday, May 30.

The 10 pm hit has shattered records for the network. During the first week of May, it beat Univision and was rated #1 regardless of language in key demos, according to Nielsen numbers. In the second quarter of 2011, “Reina” was averaging more than 2.1 million adult viewers 18-49.

The network has already announced the murder mystery “La Casa de al Lado” as its replacement in the 10 pm slot. But can the new novela fill in the big shoes Kate del Castillo leaves behind?

In the meantime, Cristina Saralegui, who officially joined Telemundo yesterday, will be doing a special with the cast of “Reina del Sur” on Tuesday, May 31. During her run on Univision, it was common practice for Cristina to interview the cast of novelas right after they ended.