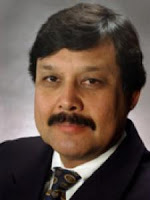 Ernest Sotomayor has been inducted into the National Association of Hispanic Journalists Hall of Fame. The ceremony will take place on June 17, during the NAHJ convention in Orlando.

Before joining Columbia University as Assistant Dean for Career Services in 2005, Ernie spent almost 30 years in journalism. He started his career as a reporter at the El Paso Herald-Post in 1976. He moved to the Dallas Times Herald 3 years later, where he worked as reporter and editor. In 1989, he joined Newsday, where he spent 16 years as an editor. He was also UNITY president between 2003-2004.
Ernie is the 27th inductee. Ray Suarez, senior correspondent of PBS’s “The Newshour,” and WFAA anchor Gloria Campos were last year’s honorees. A list of all inductees since the creation of the NAHJ Hall of Fame in 2000, is available here.