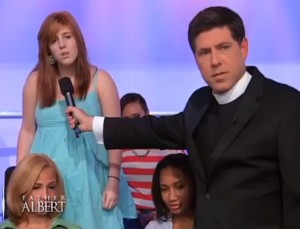 Padre Alberto Cutié, the former Catholic priest who made headlines when he was caught making out with a woman in a Miami beach and wrote a book about his break from the Catholic Church, makes his English-language talk show debut today on Fox.

What is he offering? In the show promos he offers “to help people” without “imposing his religious beliefs” and without judging them.  He says “don’t be fooled by the outfit,” and in his first show talks about “love at first sight,” saying that’s what he felt when he met his wife.

Padre Alberto had his own talk show on Telemundo in 1999. He has also hosted shows on Telemundo Internacional and the EWTN en Español network.

“Father Albert” has his own YouTube channel, where you can check out some clips.