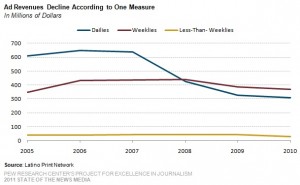 Hispanic newspapers, TV, radio and magazines are not taking as hard a beating as English-language media. According to the just released 2011 State of the News Media annual report on American Journalism produced by the Pew Research Center’s Project for Excellence in Journalism, while Spanish-language newspapers overall lost circulation in 2010, and continue to decline, they’re not losing audience nearly to the extent of the English-language press. 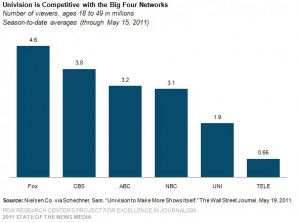 For TV, the outlook was even more positive. Audience and revenue continues to grow, with Spanish-language TV ad spending rising 10.7% from 2009. Univision during multiple periods even competed directly with ABC, CBS and NBC.

Other growth areas:  Spanish-language radio, which in 2010 saw an increase in the number of stations, and magazines showed improvement too, with year-over-year growth in ad spending.

Check out the full report here.