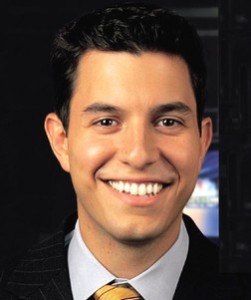 Reporter Tom Llamas has been named anchor of a new 5 pm newscast to debut on September 12 on WNBC.  He’ll be sharing the anchor desk with Shiba Russell, who is currently anchoring weekends.

Tom has been a general assignment reporter for NBC’s O&O in New York since 2009, occasionally doing some anchor fill-in duties.  As part of the promotion, he’ll also become an NBC News correspondent. Prior to joining WNBC, Tom was a reporter at WTVJ-6, the NBC station in Miami, where he spent 4 years.  He previously worked for MSNBC as a political campaign reporter.  He started his career working with the NBC News Specials Unit during the 2000 presidential election.