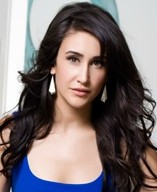 Suzanne Marques has been named the new Entertainment Reporter for CBS2 & KCAL9 in Los Angeles.  Until recently, she was freelancing for both stations’ newscasts.

Prior to joining CBS, Suzanne was a general assignment reporter for the “Fox 11 Morning News” and “Good Day LA.”  She previously worked at KGET in Bakersfield and WXIA in Atlanta, Georgia before returning to Los Angeles.  She started her career as a web producer for KNBC.