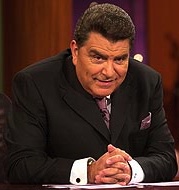 The Academy of Television Arts & Sciences today announced Don Francisco, whose real name is Mario Kreutzberger,  is among the 2012 inductees to its Hall of Fame.

His show “Sabado Gigante” has been recognized by the Guinness Book of World Records as the “longest-running TV show in the Americas.”

The Emmy Award winning host of “Sábado Gigante” and “Don Francisco Presenta” was honored with a Hollywood Walk of Fame Star in 2001.

Don Francisco and 7 other television “groundbreakers” will be honored in the 21st Annual Hall of Fame induction ceremony held at The Beverly Hills Hotel on March 1st, 2012.  The other inductees are:  comedy writer/producer Chuck Lorre (co-creator of “Two and a Half Men), reality show producers Mary-Ellis Bunim & Jonathan Murray (creators of MTV’s “The Real World”), former Disney CEO Michael Eisner and actor Sherman Hemsley (who played George Jefferson in “The Jeffersons.”).  Comedy duo Vivian Vance & William Frawley (Ethel and Fred Mertz from “I Love Lucy”) will be inducted posthumously.

More than 120 people have been inducted into the Hall of Fame since its inception in 1984.  You can find the announcement and more information on the other inductees here.