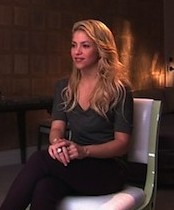 Shakira’s exclusive interview on “Aquí y Ahora” made Univision the No. 2 broadcast network behind NBC, among Adults 18-34, during 10:00pm-11:00pm  time period on Tuesday night.

Overall, the one-hour special delivered an average audience of 2.6 million total viewers 2+, according to numbers released by Univision.

If you missed it and want to check out an excerpt of the interview conducted in English, click here.

If you’re wondering why Maria Elena Salinas conducted a portion of the interview in a language other than Spanish, it’s because apparently Univision is now uploading parts of interviews and producing English content for its Univision News tumblr blog (you can find it if you scroll down to December 6th).