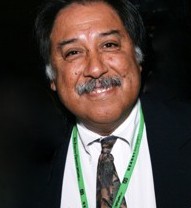 Months after the death of Pulitzer prize winning reporter George Ramos, the Cal Poly Journalism Department has announced the establishment of an endowment in his honor.

The George Ramos Cal Poly Journalism Endowment will support student scholarships and various program developments. According to a release, the department also hopes to appoint an endowed chair to support the education of future journalists.

George reported for the Los Angeles Times for 25 years as a reporter, editor, bureau chief, and columnist. He was a three-time Pulitzer Prize-winning journalist.

In 1984, he won the Pulitzer Prize Gold Medal for Meritorious Public Service, as part of the team that produced a three-week series of stories about the roots, lives and aspirations of the 3 million Latinos who lived in Southern California.  He won his second Pulitzer in 1993, for on-the-spot reporting on the Rodney King riots.  He picked up a third Pulitzer in 1995 for his on-the-spot reporting of the Northridge earthquake.

A graduate of Cal Poly, he left the LAT in 2003 to become of Cal Poly Journalism Department Chair – a role he held until 2007.