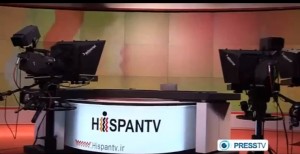 Whoa!  Did you read that right?  Yup.  The Islamic Republic of Iran Broadcasting (IRIB) on Tuesday, January 31 officially inaugurated Hispan TV, a Spanish-language international HD channel, although it started airing on a test basis on December 21, 2011.

According to a Spanish-language promotional video on Hispan TV’s website, the 24/7 television network will broadcast newscasts every 2 hours and air documentaries and educational programs.

In another video in English, the narrator says the channel’s executives “rejected the claims that Iran would use the channel to find a backyard in Latin America.”

If you’re looking for a TV job, they’re hiring…

The channel is using a YouTube video as a recruiting tool – calling for professional journalists to join the new network effective immediately.