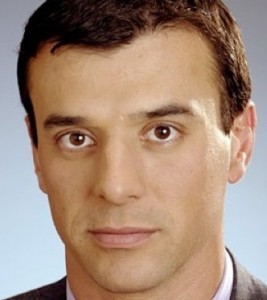 Miguel Marquez is back at CNN as a Los Angeles-based correspondent.  His first day on the job was yesterday.

Miguel most recently spent 6 years as ABC News correspondent – the last 3 based in London.

Before joining ABC News, Miguel was a correspondent at CNN based in L.A. from 2003 to 2005. He previously worked as a news anchor for CNN Headline News, based in Atlanta.

Prior to CNN, Miguel was a reporter at FOX affiliate KSAZ in Phoenix and at WNBC in New York.  He also worked with CBS News in New York where he was a national desk assistant to the CBS Evening News, 48 Hours and 60 Minutes.

Before embarking on his broadcast journalism career, Miguel spent several years in Washington, D.C. as a legislative assistant to former Rep. Bill Richardson, and working for the Congressional Research Service in Washington, D.C..

Miguel holds a master’s degree in international affairs from Columbia University and a bachelor of arts degree in political science from the University of New Mexico.