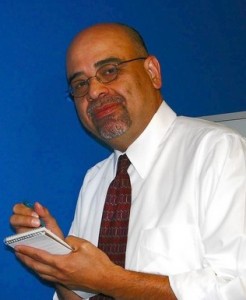 Jesse Linares, Deputy Editor of Hoy Los Angeles died last Saturday, April 14. He had a brief battle with cancer. He was 49.

Jesse worked at Hoy since its founding in 2004. He began his career at La Opinión,where he spent almost 8 years first as a reporter, later working as assignment editor, assistant city editor and interim city editor.

In the LA Times obituary, Hoy editor Reynaldo Mena remembered his colleague: “Jesse was a fundamental part of Hoy. His love of journalism not only impacted our coverage, but the work of his co-workers.”

Jesse is survived by his wife, journalist Victoria Infante, and their 1-year-old son, Victor Santiago Linares.