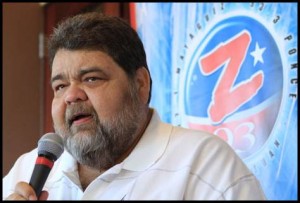 Pedro Arroyo, Director of Programming of SBS’s Z’93 radio station in Puerto Rico since 1983, passed away unexpectedly last night. He was 60.

Pedro was visiting his sister when he collapsed. He was pronounced dead at 6:30 pm Saturday. Cause of death was determined to be respiratory arrest. He had been dealing with some health issues for several months.

In a statement, Raúl Alarcón, President and CEO of SBS said: “We offer our deepest sympathies to his wife, Ana, their children, and the rest of his family and all the people of Puerto Rico at this time of great loss. Pedro was a remarkable and kind individual who left an indelible mark on the company and on all of the people who had the privilege of working with and knowing him. He was a devoted husband and father, a strong and patient leader, a dedicated and talented professional and a deeply involved member of his community. He will be greatly missed both as a long time friend and colleague.”