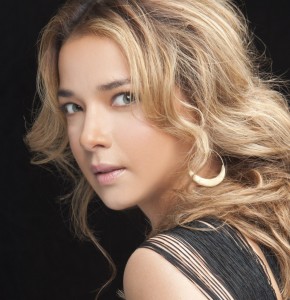 Telemundo has signed actress Adamari López to become a co-host of “Levántate,” the network’s weekday morning show.  She’ll join the rest of the cast this summer.

Adamari, a native of Puerto Rico, is known for her many roles in Televisa telenovelas, which have aired on Univision. Among them:  “Amigas y Rivales,” “Mujer de Madera” and “Alma de Hierro” (Soul of Steel).  Most recently, she won first place in the dance competition show “Mira Quien Baila.”

The actress, a breast cancer survivor, is spokesperson for “Save Lids to Save Lives” which benefits the Susan G. Komen Foundation. People en Español recognized her as Person of the Year and included her in the magazine’s 25 Most Powerful Women in 2011 for sharing her personal struggle with the disease and for her commitment to find a cure.