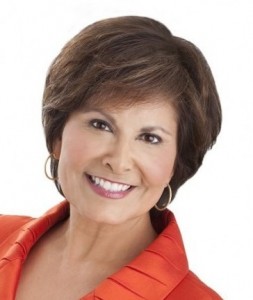 Gloria Campos has renewed her contract at Dallas ABC affiliate WFAA-8 until the end of February of 2014. The deal includes a pay cut and reduced working hours.  She’ll continue anchoring the 10 pm newscast with John McCaa, but she will no no longer helm the 6 pm show.

“I will be going part-time in September of this year,” Gloria tells me. “It is my choice—I have been here since September 1984 and been in television news since May of 1976. It is a high stress job and I’m ready to slow it down.  Yes, it will be for less pay and less hours, but I’ve been preparing for this for quite a while and feel comfortable stepping back at this point. I have not decided what I will do after February of 2014. I am  hopeful that a new opportunity will present itself.”

Gloria became WFAA’s first Latino anchor in 1984. She has been at the station since.  She began her television career at KGBT-TV in Harlingen, Texas, where she grew up.

A multi-award winning anchor, Gloria was inducted in the NAHJ Hall of Fame, along with PBS “NewsHour” correspondent Ray Suarez, in 2010.

“There’s no doubt our industry is changing rapidly and many high priced anchors have either been dropped or their salaries cut,” she says. “It is rare that a TV news anchor gets to go out on their own terms.  I am still doing the 10pm news and that is of course the prime newscast of the day so obviously I still have equity here. So I am very thankful that my plan to scale back could be accommodated… Being a News Anchor is not like being a Supreme Court Justice, we don’t  serve until we die. I’ve had a long, satisfying and rewarding career.”