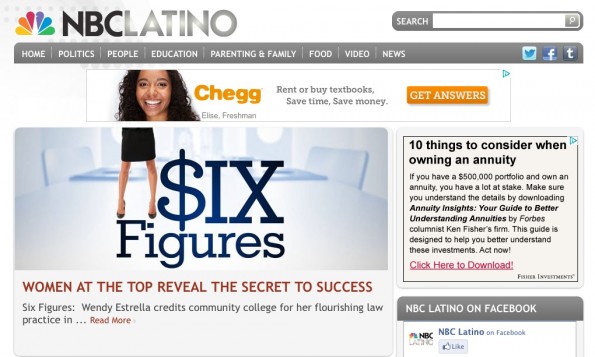 After a seven month test run on tumblr, NBCLatino.com officially launched its news and lifestyle website today – a little later than originally scheduled. Even though there had been no exact date set, the site was supposed to launch in early 2012.

In an interview in December, Chris Peña, the site’s Executive Editor, said the site would target acculturated Hispanic females 25-54.”We want to highlight Latino human interest stories – of Hispanics doing great things in the community,” he said during that interview.

Today’s centerpiece story, predominantly displayed above the fold on NBCLatino.com, is about successful women making over six figures. That’s followed below by the Mexican presidential election results.

About starting out on the Tumblr platform, spokeswoman Meghan Pianta said it was “a great way to not only get the team up and running, producing content and becoming integrated into the network, but it also enabled NBCLatino.com to build an early following using a social network—growing an audience and followers. Now that we’ve officially launched, the editorial pipeline is already fully operational and we can hit the ground running.”