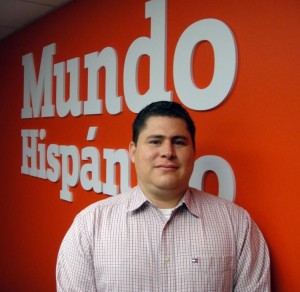 Mario Guevara, a reporter for Mundo Hispánico, the Spanish-language weekly published by the Atlanta Journal Constitution, has made headlines.

The Salvadoran photojournalist, who has been in Georgia since 2004, had applied for political asylum, but a judge denied his case on June 21 and ordered him, his wife and oldest daughter to leave the country in 60 days. His situation was aggravated by the fact his wife was arrested on Tuesday, July 3, for driving with an expired license.

“We were so humiliated. My wife was treated like a criminal in front of our children,” says Mario. “They handcuffed her and took her away in a patrol car while our children watched.”

Mario’s wife and 14 year-old daughter were included in his political asylum application.  He says he has gone to court at least 7 times throughout the years and his case had been postponed multiple times.  While his application was under review, he and his family have lived in the U.S. legally, with job permits.  But he claims that last year the United States Customs and Immigration Service (USCIS) made a mistake and denied his wife a work authorization extension, even though his was approved. Mario’s job permit expires December 12.

“That’s why her license had expired.  We were waiting for our court hearing to resolve everything,” says Mario. “When they arrested her, I decided to go public with our situation. On Tuesday, the news broke.  On Wednesday, journalists started sending out a petition to help me get President Obama’s attention and on Thursday, the scandal broke.”

Mario says the media coverage led to USCIS contacting his attorney to notify them that he was a candidate for prosecutorial discretion and would close his case, putting a halt to deportation proceedings.

“But that offer isn’t enough.  They didn’t say anything about work authorization or legal status.  I can’t stay here undocumented, knowing how difficult life is if you don’t have papers.  And I can’t go back to El Salvador. It’s dangerous not only for me, but for my children. I can’t risk their lives,” states Mario.

In 24 hours, almost 800 people have signed an online petition calling to stop the deportation of Mario Guevara and his family.

“I feel priviliged by the outpouring of support of my community and the solidarity of my journalist colleagues. That so many people who don’t even know me have supported me with their signature is a blessing.”