The newest Spanish-language broadcast network is set to kick off in a matter of hours.  The highly anticipated arrival of MundoFox will be closely monitored not just by the competition, but by advertisers, and of course, viewers, who are being promised an “innovative” alternative.

MundoFox, which started testing its signal on August 1st, makes its official debut at 7 am on August 13, with the animated children series “Zula Patrol.”  Telenovelas will occupy afternoon slots until the 6 pm national newscast, which will air live on the East and West coasts.

The network will then air a half hour of the original “Betty La Fea,” which first aired on RCN Colombia in 1999 and on Telemundo network in 2000, and later made its way to Telefutura in 2009. It will also air some Fox network shows dubbed into Spanish, such as “American Dad” and  “Bones.”

In an interview with Media Moves last month, MundoFox President Emiliano Saccone said the network will provide 16.5 hours of programming for its affiliates on weekdays and 18 hours on the weekend.  “Although the network will supply them with programming should they need it, from 1 to 7 am is for them to do whatever they want with that time.”

8:00 pm –  “Los Exitosos Perez” – which aired originally on Televisa and later on Univision

As MundoFox begins its run, it faces some distribution challenges.  While the broadcast network has secured the #1 Hispanic DMA – Los Angeles –  it has only gotten a low-powered signal in New York, the #2 Hispanic market.

During the MundoFox launch party on Thursday night, Fox International Channels President Hernán López said MundoFox had  signed affiliate agreements with 60 stations across the country, representing 80% of all Hispanic homes in the U.S. and stressed that the network will shake up Spanish-language television today, just as Fox did 25 years ago. “We’re going to bring a new sensibility to Spanish-language television. We define it as Latino entertainment and American attitude.”

Here’s a list of the most recent affiliates that have signed up with MundoFox. 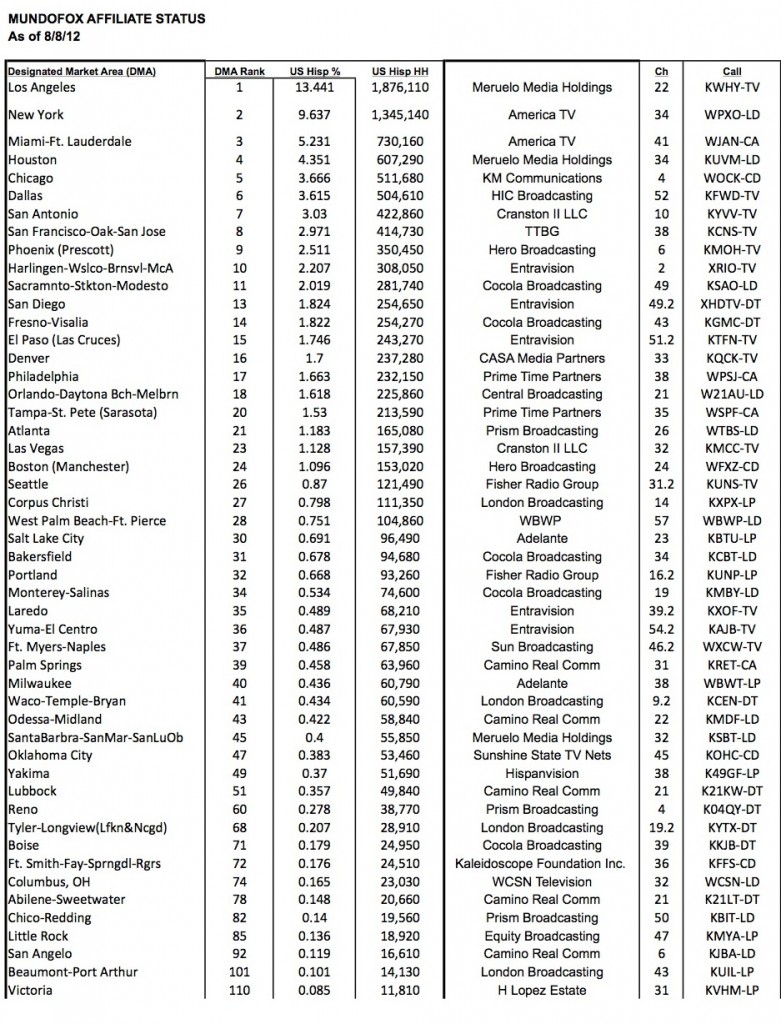