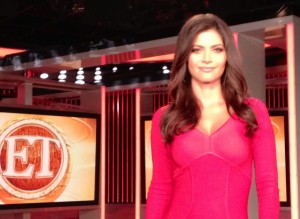 Chiquinquirá Delgado was scheduled to appear on “Entertainment Tonight” last Tuesday night, but if you tuned in, you didn’t see her.

The Univision “Despierta América” host was in L.A. last week and in the “ET” studios.  A source sent a photo of her on the show’s set.

A rep from her management company, LatinWE, said they couldn’t comment right now as to why her scheduled appearance had to be postponed.

An ET spokesperson said they were very much aware of Chiquinquira and that they would get back to me with a comment.  They have yet to release a statement.