There were no formal announcements.  No press releases.  Yet, today, the Univision/ABC News website was very quietly launched – the same day that Univision held its first “Meet the candidate” event with Republican candidate Mitt Romney. 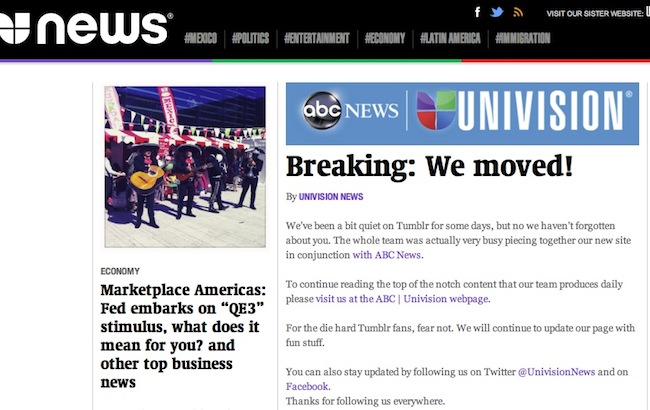 A visit to the Univision News English tumblr site shows a message indicating they’ve “moved,” but promise to continue updating the Tumblr site.

The new co-branded site lives on ABCNews.com. Its URL is actually http://abcnews.go.com/ABC_Univision

A box with job ads for the new ABC/Univision News venture appears prominently on the front page, but when you click on them, all the listings indicate the jobs may have already been filled and offer a link back to the mediabistro job board.

When the joint venture was announced in May, ABC and Univision said they would launch a news website before the presidential elections, and as a precursor to the cable news network set to debut in 2013.