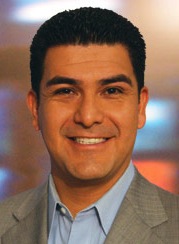 Israel Balderas, 10 pm news anchor for FOX Charlotte, was named TV News Anchor of the Year by the Radio Television Digital News Association of the Carolinas.

Israel, who started at WCCB-27 as morning news anchor in 2010 and promoted to FOX News @ Ten in 2011, was recently renewed for a third year at FOX Charlotte.

Prior to moving to Charlotte, Israel, who’s also a licensed attorney, was a political journalist and commentator based in Washington, D.C.