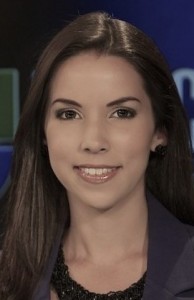 Lorena Inclán spent her Thanksgiving holiday packing and moving from Orlando to Jacksonville, where she’s starting a new job at duopoly WTEV/WAWS, the CBS and FOX affiliates.

“I’m very excited to be making a crossover into English news,” Lorena tells me. “Crossing over into English news will be a big change for my journalism career and I’m definitely looking forward to it. However, I will miss my friends and colleagues at Univision Orlando. My time as a multimedia journalist for Univision has without a doubt shaped me into the reporter I am today.”

Lorena was most recently a multimedia journalist at WVEN-26, Noticias Univision Florida Central in Orlando, where she was hired a little more than a year ago. Her last day at Univision Orlando was Nov. 20th.
Before she joined the Entravision-owned station, she spent more than a year as a reporter, anchor and producer for both Telemundo Amarillo and its sister station NewsChannel10, a CBS affiliate.