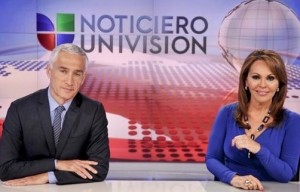 The network will be using its multiple platforms to deliver election night coverage, through the network and local stations, online, mobile, radio and via social media.

News coverage kicks off at 7 pm ET and will continue uninterruptedly until 3 am ET. Jorge Ramos and María Elena Salinas will be live from Univision News’ Election Center in Miami, leading the network’s team of journalists and analysts, providing information on the progress of the presidential run as well as other races taking place across the nation.

Washington correspondent Lourdes Meluzá will be at Romney campaign headquarters and reporter Luis Megid will be at President Obama’s camp throughout election night. Additionally, María Antonieta Collins will report live from Arizona, Jaime García from Nevada, and Lourdes Del Río from Florida. Fernando Pizarro will also provide national commentary for the network from Washington, D.C.

Election coverage will be streamed live on  UnivisionNoticias.com, the YouTube Elections Hub atYouTube.com/politics, on mobile and via the Noticias Univision app.  English-language coverage will be available on abcnews.com/abc_univision.

On Wednesday, November 7, a special edition of Univision’s morning show “Despierta América” will offer post-election news and analysis from 7-8 am.

Under its signature political banner “Decisión 2012,” Telemundo will be collaborating with NBC News to offer non-stop news coverage.  Starting  at 7 pm ET, José Díaz-Balart will begin election night coverage live from “Democracy Plaza,” a gigantic election news studio for all of NBC news properties based at the New York City’s Rockefeller Center.

An interactive electoral map superimposed on the landmark’s iconic ice-skating rink will allow the public to follow the candidates’ progress in the Electoral College on two projections on the facades of the surrounding buildings.

Anchor Vanessa Hauc will review the results of the only national exit polls on Spanish-language television. Reporter Rogelio Mora-Tagle and political analyst Carlos Rajo will follow developments across the nation’s most hotly contested states. Presenter Carmen Dominicci will interact with the public at “Democracy Plaza.”

Washington, D.C. correspondent Lori Montenegro will be at President Obama’s campaign headquarters and reporter Angie Sandoval at Governor Romney’s.  Cristina Londoño will report from Los Angeles and Francisco Cuevas will be in Houston. Sofía Lachapelle and Carlos Botifol will cover the voting in Florida and Nevada.

Telemundo will also present “The Pulse of the People” with “Al Rojo Vivo” anchor María Celeste Arrarás, who will incorporate content generated on social networks, including multiple live video conferences on Google Hangout, follow opinion trends and report on how the candidates will be trending on Twitter.

All “Decisión 2012” programming will be streamed online and on mobile platforms starting at 7 pm ET.

Reporters Ione Molinares will be at the Obama Campaign Headquarters in Chicago and Adriana Hauser at the Romney camp in Boston.  María Santana will report from New York; Karina Dalmas from Los Angeles; Rafael Fuenmayor from Miami and Gustavo Valdes from the Mid West.

Rolando Nichols will anchor Noticias MundoFox’s election coverage starting at 6 pm ET.  The network will be depending largely on the correspondents of its partner NTN24  to provide the election night coverage.

The network’s only two staff correspondents – Max Aub and Carolina Sarassa, will be at Romney’s headquarters in Boston and Las Vegas, respectively.  Freelancer Vicente Serrano will be at the Obama camp in Chicago.

Noticias MundoFox will provide multi-platform coverage through its regular newscasts, news briefs and live stream for the digital platform.