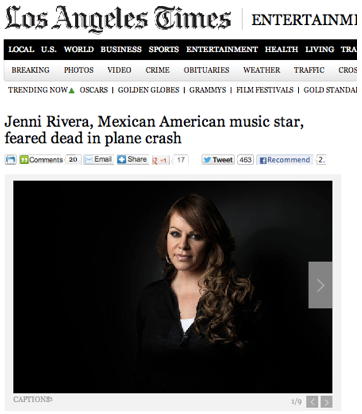 The Los Angeles Times yesterday was the first major newspaper to publish news of the disappearance of Jenni Rivera’s plane.  But as the day wore on, even though at first slow in realizing the significance of the news that Jenni was a major superstar, multiple top print and online outlets started reporting on the search for the missing plane, and later, her confirmed death.

Even entertainment gossip site TMZ was on it yesterday.

Today, news of the death of the Los Angeles area-born “Diva de la Banda” and profiles of the popular singer made it to the top newspapers – from the New York Times, USA Today, Newday, NY Daily News to the Wall Street Journal, highlighting her importance in the music industry – she has sold more than 15 million albums – and her fan base. 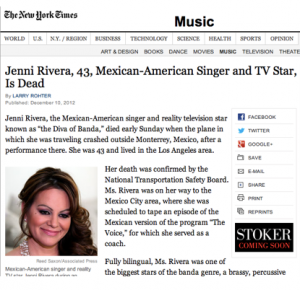 Here are some of today’s story links: