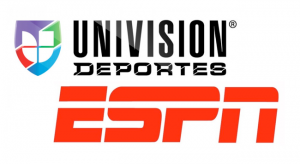 ESPN has signed a deal with Univision Deportes that will grant the English-language sports network the rights to air Mexico’s home FIFA World Cup qualifying matches and international friendlies.

The series of 20 matches began yesterday, Wed., Jan. 30, with an international friendly in Phoenix, Arizona, vs. Denmark at 10 p.m. ET and will conclude with the team’s last match before the 2014 World Cup.

Univision Deportes and ESPN will also televise the Mexico vs. USA match in Mexico City on Tuesday, March 26 at 9:30 pm ET.

Here’s the 2013 “El Tri” schedule on Univision Deportes (in Spanish on Univision Network and UniMás) and on ESPN (English):