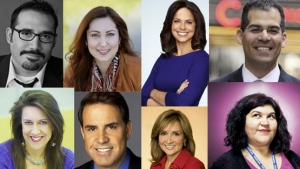 Hispanicize 2013 (#Hispz13) has expanded its social media and marketing programming to include a special track for journalists.

Hispanicize 2013 (www.hispanicizeevent.com), which will take place April 9-13, 2013 at the Eden Roc Hotel in Miami Beach will offer 20 sessions in its inaugural Hispanic Journalist Showcase, as part of its more than 80 sessions and 220 speakers that will be discussing every facet of media, social media, entertainment and marketing.

Below is day-by-day schedule of the Hispanic Journalist Showcase:

– Church and State: How to Juggle Your Professional and Personal Personas in Social Media

– The State of Hispanic Journalism in 2013: An Honest Look at the Obstacles, Opportunities and Trends Impacting Latino Journalists

– Your Ultimate Guide to Freelancing in the Digital Age

– Vroom, Vroom: Getting Plugged into Covering and Reviewing Cars

– The Hispanic Journalists’ Toolkit: A Look at the Latest Cultural Resources for Reporters

– From Journalist to Marketer: Your Complete Guide to Making the Change

– From Journalist to Media Entrepreneur: Case Studies from Hispanic Journalists who have made the leap and are succeeding

– Finding Your Voice as a Commentator

– Getting Your Book Published the Smart Way

– Meet the Leading Conservative and Liberal Voices of Hispanic Journalism

The schedule is still being updated. You can see updated version online at http://www.hispanicizeevent.com/schedule/schedule-2/celebrities.html.