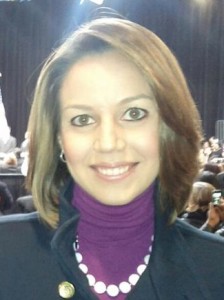 Emmy-award winning reporter Janet Rodríguez  is leaving Phoenix for the Windy City.  Janet has been a reporter and fill-in anchor at KTAZ 39, Telemundo Arizona for the past 5 years. Her last day is today.  She begins a new job as a Telemundo Network correspondent  based in Chicago on February 11th.

Janet, who has regularly collaborated with Telemundo network news during her time in Phoenix, will now be covering the mid-west for “Un Nuevo Día,” “Al Rojo Vivo” and “Noticiero Telemundo.”

She’ll be moving into a newly created position. Telemundo previously had no Chicago-based correspondent.

Prior to joining KTAZ 39, she was a reporter for WZDC TVm Telemundo in Washington, DC.