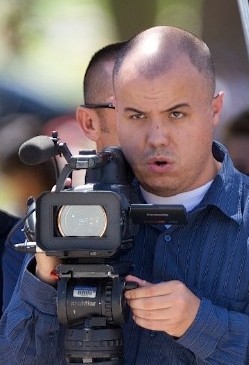 Paul says he fell in love with Seattle during an assignment while working at KSTU in Salt Lake City.

“I… felt that if I was going to continue in television news, it would be a great market to wind up in. I applied at KIRO and KCPQ, ultimately landing at KCPQ after a somewhat-whirlwind week. On the 2nd of February, they scheduled a flight for me and by the 9th, I had an offer. The move also puts me closer to my long-time girlfriend, Breanna, who is an anchor/reporter at KNDU/KNDO in Tri-Cities/Yakima, WA.”

Before KSTU, Paul previously worked at KOLD 13 and KGUN 9 in Phoenix and KSL-TV in Salt Lake. He has also worked as a radio DJ at KLPX 96.1 in Tucson and at 105.5 “The Hawk” in Idaho Falls.

Paul is also an independent filmmaker. In 2010, he wrote and directed his first short film, “Pocho” and last year produced “Incommunicado.”  That film got accepted to screen at the Boston Latino International Film Festival in October of 2012. It will be screened at the CineFestival De San Antonio on February 27th.

“I haven’t given up on a full-time film career, in terms of writing and directing movies. It’s always something I think about and even if I spend my days off for the next six months shooting and editing another film, I’m happy with that. I couldn’t have found a better place to land than Seattle.”