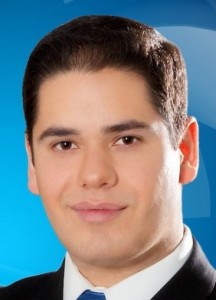 Diego Santiago is the new sports anchor for the Telemundo Southwest stations.  He’ll be based in Phoenix, Arizona and anchor back to back sports segments for the local weekday newscasts in Phoenix, Tucson, Denver and Las Vegas.

In 2006, Diego participated on ESPN Deportes’ reality series, “Dream Job: El Reportero” and was selected as one of the six finalists of the national competition.