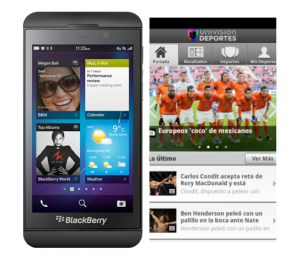 Kevin Conroy, Univision’s President of Interactive and Enterprise Development announced a new partnership with BlackBerry, as the retooled smartphone company, which changed its name from Research in Motion, launched its latest gadgets.

The touch-screen Z10 and the full-keyboard Q10 run on the new BlackBerry 10 platform was unveiled late last week.

UVideos as well as Univision’s Deportes and Marcador apps are now available in the BlackBerry World app store.

On his corporate blog, Conroy points out that “Hispanics are leading the consumer marketplace when it comes to mobile,” with more than 75% of the U.S. Hispanic population owning a smartphone.

According to Conroy, consumption of online video by Hispanics has soared 282% over the last 5 years and “the desire for Spanish-language digital video is at its peak.”